Showing posts from February, 2018
Show all

February 05, 2018
Update from the team: MV Betanzos South Atlantic Ocean 5 February 2018 --  0930 UTC Our captain has decided that it is in the best interest of safety and expediency to proceed directly to Capetown, South Africa rather than Punta Arenas, Chile.  We are currently heading north to avoid the possibility of encountering ice.   Currently there is no ice in sight or on radar.  In due time we will head easterly toward Capetown. Our entire team is safe.  Most are resting in their bunks and in good spirits.  We will keep the amateur radio community and our families informed as we continue our journey. Ralph - K0IR Bob - K4UEE Erling - LA6VM
Post a Comment
Read more

February 03, 2018
The much talked about BoD meeting produced some decisions and the minutes of that meeting was finally released. Here it is. It seems odd that they released it on Friday evening. Then again, not so odd. Releasing bad news on Friday is a very common tactic among politicos. Release a bunch of news on Friday, because nobody reads the paper on Saturday. It seems like Newington is taking a few lessons from Washington? Either way, the minutes are worth a read, if for nothing else but to see what your league is up to.
Post a Comment
Read more

February 03, 2018
We all know that the ARRL BoD is not the most popular entity these days. But one of the things they did recently made a tiny Republic which was part of the former Yugoslavia into a new officially recognized DXCC entity. Yes, this is Kosovo, and it's now an official DXCC entity. Well, our friend from Finland heard of this news and flew in to Pristina pronto, as he wanted to be "on the ground" to get things well activated. Love him or hate him, he is "Martti on the spot" when it comes to new DX entities. Immediately the pileups came through thick and ferocious. Electric power consumption increased worldwide as transceivers and amplifiers fired up, beaming glorious RF to the newly recognized entity. Ah, but there is one wrinkle. When it's done, it ain't done until the paperwork is done. You see, the contact is one thing, but DXCC rules require written confirmation. You do this either with a QSL card, a letter, or through ARRL Logbook of The World (LoTW).
6 comments
Read more 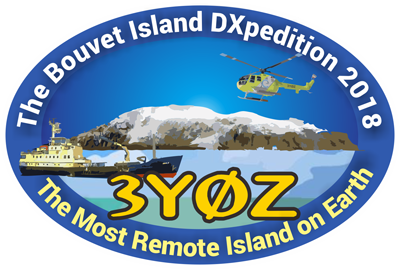 The much anticipated 3Y0Z Bouvet Island DXpedition has been aborted. As reported on DX-World, there were issues with getting weather clearance to fly their helicopters, which would delay them for a week and more. The island is pretty, the weather is not. Winds of up to 80 knots and more caused the ship to bob up and down making helicopter takeoff and landing extremely unsafe. Basically as one DXer put it - "it's like a cork in a flushing toilet."  Then came this update from co-leaders K0IR, K4UEE, LA6VM: During the last 72 hours we continued to experience the high winds, low clouds, fog, and rough seas that have prevented helicopter operations since our arrival at Bouvet. No improvement was predicted in the weather forecast for the next four days. Then, last night an issue developed in one of the ship’s engines. This morning the captain of the vessel declared it unsafe to continue with our project and aborted the expedition. We are now on our long voyage back t
Post a Comment
Read more
More posts